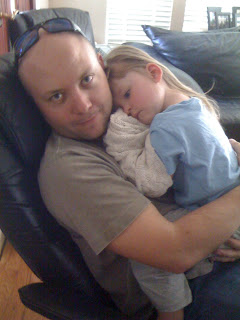 Someone likes to wake up slowly.
Posted by Kim at 5:26 PM 1 comment: 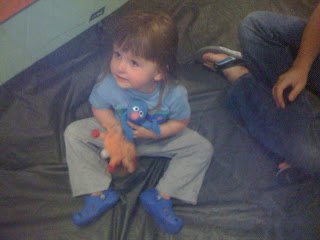 Someone made a beeline for the display tents at REI. Although judging by the way she jumped in I think she thought it was a bouncy house.
Posted by Kim at 10:42 AM No comments:

Molly's latest obsession has been horsies! This started when we saw Toy Story 3 and she fell in love with Woody and his trusted steed Bullseye. Everything became a horsie. EVERYTHING. The spine of a book. A small pillow. A rubber duckie. Bath toys. Regular toys. Tupperware lids. You get the idea. I picked up a Woody, Jessie, and Bullseye toy set and Molly was in love. Sure, she'll play with Jessie and Woody, but her main thing is to have every single toy she owns ride Bullseye. Oh, and she insists on bringing him EVERYWHERE.

As a result Molly has turned whatever she can into a horsie of her own to ride. Here are some of the results.

I also pulled her old horsie toy down from the attic and everyone has been getting a ride.

On Friday July 9th Molly and I went down to the Monterey Bay Aquarium with Auntie Amy and Leo. The kids had a blast. Leo was mesmerized by the penguins and kept batting Amy's hand down when she tried to get him to say bye-bye as he did NOT want to leave. Molly was into the sea horse exhibit as her latest obsession has been with horsies and the sea kind suited her just fine. I didn't bring my camera, but got a few shots off on my phone.

Chillin' at the sea otter exhibit:

Checkin' out the sea horses:

Amy's pictures can be found here.
Posted by Kim at 2:59 PM No comments:

When Aunt Tracey was down for a visit over the 4th of July weekend she arrived with a little something special for Miss Molly. Aunt Tracey made Molly her very own mailbox out of felt with some homemade post cards. Each post card was addressed to Molly and they were from Aunt Tracey, Granny, and Grandpa Marsh. Molly LOVES it. Aunt Tracey wanted to have a way to send Molly little gifts and cards when she was not around. Granny sent the first piece of mail for Molly's new mail box.

Realizing there's something else in the mail box.

Trying to get the big white envelope out.

For the rest of the pics click here.
Posted by Kim at 2:44 PM No comments:

The Jodoins were gracious enough to have us over for some pool time last Friday. The weather had been warm and with their new pool cover the water temps were nearing 90! The Chouns and the Connally/Shipmans were also there. The kids all had a blast in the pool as did the adults. Afterwards we grabbed some dinner and let the kids tire themselves out playing before we put them all down. We had 7 kids spread across 4 rooms and it WORKED! The dads played a game while the moms caught up chatting. Auntie Bree also made some homemade ice cream and a delicious rum cake for dessert.

For Jenn's pictures click here.
Posted by Kim at 2:28 PM No comments:

Some more pics from the bubble time with dad.

N took some cute pics of Molly lounging around and wanting her back rubbed. 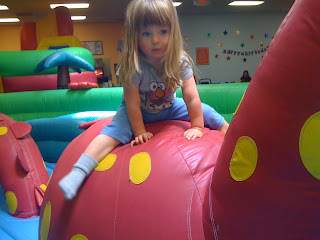 Horse, Loch Ness Monster... close enough.
Posted by Kim at 11:27 AM No comments: 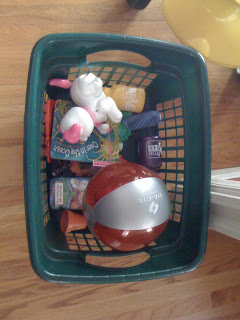 Gotta love a little one that insists on cleaning up her toys first before nap time. I didn't even ask.
Posted by Kim at 3:59 PM No comments:

Molly and N enjoying some bubble time. Anything can be a game.
Posted by Kim at 10:11 AM No comments:

N was playing with Molly this morning when she turns to him and says, "You be Buzz, I'll be Woody." Nathan replies, "Ok." Then Molly immediately asks, "Buzz, are you OK?"

I was in the shower when Molly woke up this morning so when I came out I asked Molly if I could have a hug. She runs across the kitchen to me and gives me a big ol' hug and a kiss. Then she looks me square in the eye and says, "Mommy, you are so cute!"

I know I posted the pics from Big Basin already, but there is a really cute story that goes along with some of them. First, let me remind you about the Princess Influence. Molly has been going old school on her Disney movies and for a while it was a toss up between Snow White (1937) and Sleeping Beauty (1959). They both showed their influence at Big Basin.

Then she makes herself right at home and pretends she's "sleeping"...

Check out the clasped hands...

Then she gets Mia and Sadie interested in this game...
(*Note her authoritative stance)

It's my hat now daddy! 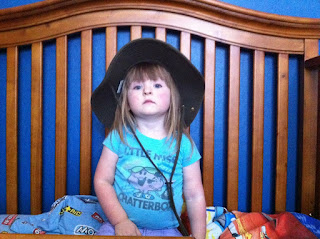 I've been informed.
Posted by Nathan at 1:24 PM No comments:

For the rest of the gallery click here.
Posted by Kim at 3:02 PM No comments:

We had a lovely long holiday weekend. It started Friday morning when Aunt Tracey flew into town. Molly and I picked her up from the airport and then met up with Granny and Grandpa Marsh at Stacks. We had a lovely breakfast and then headed to the park where Molly proceeded to tire Grandpa and Aunt Tracey out. We headed back to Granny and Grandpa's house for nap time. Molly went down first and Aunt Tracey and Grandpa followed. After nap time we had fun packing into the little side deck off Grandpa's den and let Molly run the show. We ordered pizza from Jake's and N finally showed up from work just before 7. We headed back home for Molly's bed time after a lovely day with the family.

On Saturday we met up with our friends Mo, Stacey, and their daughter Maya at a local park. We let the kids run around and play and when snack time was declared we decided to figure out our own lunch plans. It was warm out, but not too hot so we decided to sit out on the patio at lunch. However, we weren't quite finished with our meals when Molly decided she was done for the day and started asking for her car seat and to go home. Since we were eating outside and our car was right next to us N put Molly in her car seat and then opened up all the windows and doors. She played happily with her Woody and Bullseye (Toy Story) toys while the rest of us finished up lunch.

After nap time we headed over to the Jodoins for a BBQ. They recently purchased a pool cover and the water temp was a lovely 86 degrees. Everyone had a blast swimming and finally got out when the grill was fired up. We could chill and eat and keep an eye on the kids playing in the back yard which was great. We put Molly down at their house so the adults could enjoy some kid free time.

On Sunday we headed back to the Jodoins for some more pool time and to help them eat all the food we didn't get to on Saturday. Molly went down for a nice long nap, but unfortunately Robert wasn't feeling that well. When Molly finally woke up we put some fireworks on the tv and then headed home.

Monday morning Molly and I got up and headed out. We were going down to Big Basin to pick up Aunt Tracey from her camping trip with friends. There were 6 kids under 6 there so we thought we'd get there early and let Molly play while everyone packed up. The ride down had a little hiccup as Molly got sick in the car. The first part on Highway 9 was OK, but she popped a little bit into 236 (a MUCH windier road). I was going slow, but I should have been more careful as I used to get super car sick when I was younger too. Once I cleaned Molly up she was back to her normal chipper self, but I still waited a good 20 minutes before getting her back in the car. Her blanket took the brunt of it, but I still washed the car seat cover when we got home. First time I had to do that.... pretty good run I'd say.

Since we were closer to the camp site than home I decided to just keep going. I figured a shorter drive with a nice long break would be better than turning back. I rolled down all the windows and went slow... pulling over whenever a car came up behind us to let them pass. Molly was a little shy when we first arrived, but quickly warmed up. We got there just in time for breakfast and Molly ate quite a bit which was a relief. The kids played while the parents packed up and we took off just before 1:00. The drive back was uneventful. Molly told me she had to cough at one point so we pulled over and let her out for a bit just to make sure cough wasn't code for throwing up. She konked out as soon as we got back on Highway 9 and slept the rest of the drive home.

Unfortunately she woke up when we got home and then had a HUGE poopy diaper 10 minutes later that woke her all the way up. She never did fall back asleep, but spent the better part of the next two hours playing quietly in her room. Molly basically pulled every book she had off the shelf and said she was "reading" in bed. I drove Aunt Tracey to the airport and then Grandma Lucille and Papa J showed up. At that point I gave up and let Molly get up. Chris, Carina, and Temperence joined us and we had a lovely (and VERY filling) family style dinner at Maggiano's for Lucille's b.day.

You can really see his eyes in this one. They are quite amazing. He was taking a cat nap on our bed trying to soak up the last rays of sunshine.
Posted by Kim at 7:43 PM No comments:

I just took this:

N also made a great video of the time lapse footage we have so far. Why yes we do have a web cam set up to take a picture whenever it detects motion (no more than one per minute)... doesn't everyone take time lapse videos of their construction projects?

Click here for more pictures.
Posted by Kim at 7:34 PM No comments:

These boots were made for walkin' 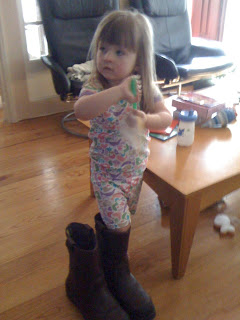 But I don't think that's what Molly will do. Those are N's monstrous boots and they go up to her knee. She only has one leg in the boot. The other one is hidden.
Posted by Kim at 9:35 AM No comments: