Eight years ago today (Yes, 8!) N and I were married on the lovely south shore of Kauai. I can't believe it's already been eight years. Then again I can't believe Molly is turning 3 in October.

Each year I have tried to follow either the traditional or modern anniversary gift. Some years have been trickier than others. This year the traditional gift was Bronze (!) and the modern was linens. I scoured the internet for bronze gift suggestions. A lot of the suggestions were various bronze sculptures or art pieces that I simply had no interest in. One site did suggest the Nintendo hand held in a deluxe bronze case that N probably would have liked, but I refuse to add to his gaming collection. He already has several hand held devices sitting in drawers not to mention the consoles hooked up to our tv gathering dust. I also liked the Brookstone wine opener that came in a bronze finish, but we already have a really nice wine opener. I finally picked out a new wallet from the Fossil store that had a broze(ish) finish and one bronze accent button. Yes, it's a stretch, but merely something to put the Watercourse Way reservation slip in. An elaborate gift card if you will. Molly will be spending Friday night at my parents while N and I enjoy a private room (One Pine: Multi-Jetted Wood Tub, Sauna & Cold Plunge) followed by an hour massage. You can never go wrong with spa treatments.

In looking up this years gifts I was reminded of what we had done in previous years. The traditional gift for the First anniversary is paper. In a shocking turn of events I bought N a gift certificate for Watercourse Way.

The Second anniversary was celebrated with a nice fluffy cotton (traditional) robe and a china (modern) coffee mug.

Our Third anniversary was celebrated on a dive boat on the Great Barrier Reef. We didn't get gifts for each other because we were diving and that was more than enough for both of us. There's actually a pretty funny story about this. It was the second day (our actual anniversary) and we were catching up on our dive log book (did our Advanced Cert on this trip). I ask N what the date was and he tells me the 25th. I then note that the previous day was the 24th and start filling out those dives. N just looks at me for a minute and then says, "Happy Anniversary" to which I reply, "Oh shit, it is." Aren't I such a romantic? At this point the Skipper interrupts to make sure he's heard things correctly. That the *husband* remembered the anniversary and that *wife* did not. Yep, he heard correctly.

Anyway, that year my mom and N's mom decided to keep our tradition going for us. My mom picked us up some wine glasses (modern). N's mom got us a leather (traditional) magazine rack.

For our Fourth anniversary I picked up a camping ice cream maker as appliances were the modern gift. I also got us some fruit for the ice cream as that was the traditional gift.

The Fifth anniversary was wood (traditional). This was the year I got N to agree to new bedroom furniture. First, it took me almost a year to find a set I liked then another year to go order it. Unfortunately when I went to order it I was informed it was no longer available as that line had been discontinued. I have found another set that I like, but the bed frame is a solid piece that will not be moved once put down (drawers underneath for additional storage). That leads to talks of doing the floors, painting, putting in baseboards... etc. etc. etc. You can see why this hasn't happened yet. Let's just get the garage project done and then we shall revisit, mmmkay?

For our Sixth anniversary I picked up a cast iron (traditional) kitchen utensil holder and filled it with N's favorite candy (modern). Yeah, the creativity is starting to wane.

Last year for our Seventh anniversary I think I spaced. I believe we went out for a nice dinner, but I think that was it. The traditional gift was copper and the modern one was desk sets. Nothing very inspiring which is why I don't think I did anything. Whoops! Sorry handsome.

I leave you with a picture of N and I in Kauai right after we picked up our marriage license. Look, N has hair!

Posted by Nathan at 6:30 PM No comments:

Last week Molly and I headed down to the Santa Cruz Beach Boardwalk to check out their free summer event Circo Brazil. Last year we saw Cirque Magnifique and I had been seeing billboards for this one so I wanted to check it out before it was gone. We arrived a little after 11:00 am to a lovely 54 degrees and a majorly overcast day. I knew it was going to be chilly so I had our hoodies, but I felt so bad for the clusters of kids freezing their asses off while wrapped up in their beach towels while their parents debated whether or not they should stay or bail. It's Santa Cruz folks, it can get COLD during the summer. The fog had not burned off and it was practically drizzling it was so thick. Lots of brand spankin' new Santa Cruz hoodies were spied as we walked the boardwalk.

We settled ourself into the wooden steps in front of the stage around 11:45 for the noon performance. Once the music started up Molly got VERY interested. She danced pretty much the ENTIRE time (30 minutes). We were packed in pretty tight so I couldn't really get the best angle, but I did capture some video.

I really need to purchase some Brazil/Rio/Carnaval type music so Molly can shake her booty any time she likes. Any suggestions?

Crazy Limbo dancer. Why yes that *IS* a cocktail balanced on his chin.

Things got crazier. Yes, the pole is insanely low. Yes, it is on fire. Yes, he does the splits.

For the rest of the pictures click here.
Posted by Kim at 11:15 AM No comments:

Who's been sleeping in my bed? 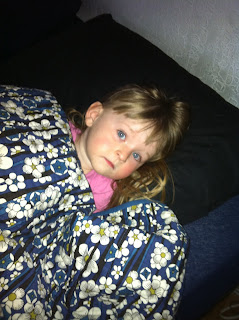 Getting ready for Muay Thai when Molly decided to crawl into our bed.
Posted by Kim at 5:38 PM No comments: 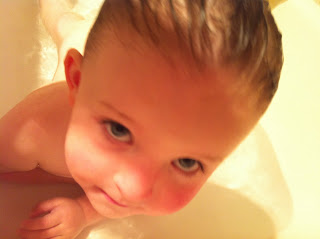 Our little fishie loves bath time. She hates getting out of the tub.
Posted by Kim at 7:53 PM No comments: 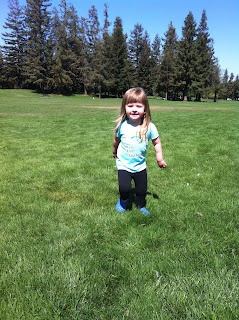 I think we might have a long distance runner on our hands. Lately Molly has been more interested in running around parks than playing on the structures.
Posted by Kim at 10:57 AM No comments: 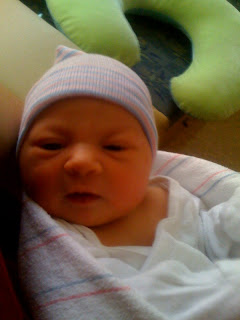 Please meet Miss Norah Rose Kelly.  Norah came into this world on Wednesday August 11th at 12:41 pm (Central Time).  She weighed in at 8 lbs 6 oz and was measured at 21 inches long.  Congratulations!
Posted by Kim at 8:30 AM No comments:

There is a great mini gym and play center up in Tahoe that we try to visit whenever we go called Tahoe Tot Spot. We bought a punch card so we can attend their open play sessions whenever we choose. They recently moved locations and we were both excited to check the new place out.

Molly is obsessed with keeping all the ball pit balls IN the ball pit. The ladies that work there LOVE her for this.

However, Molly's favorite thing BY FAR is jumping down the trampoline into the ball bit. She can do this for HOURS!

For the rest of the pictures click here.
Posted by Kim at 8:18 AM No comments:

A walk in Tahoe

Last week (August 3-6) we headed up to our cabin in Tahoe. The weather was great and we were able to get out on a hike as a family.

The trail to the pond, our normal hike.

THIS was in Sadie's nose. Lovely, huh?

Sadie LOVES to be off leash.

You can still see the fire damage, but lots of new growth too.

For the rest of the pictures click here.
Posted by Kim at 8:05 AM No comments:

The weekend of July 31st the Harris Family was in town and they spent Saturday night at chez Hickson. Asher and Molly ran around and got into all of her toys while the parents visited. N cleared out a spot in his office for Molly's old play yard and we successfully got Asher down for the night and a nap the next morning. This was great seeing as the office still does not have a door! Luckily the hallway (Office, Molly's room, bathroom) does so we were at least able to shut that and leave some fans on for white noise.

For the rest of the pictures click here.
Posted by Kim at 7:57 AM No comments:

On July 28th Molly and I met up with Auntie Amy, Leo, and friends at Happy Hollow. We spent most of the time in the Zoo area, but then Molly spied a horsie she absolutely fell in love with.

Waiting for the Snow White Puppet Theatre to start.

Checking out the Meerkats up close and personal.

Up to no good, I assure you.

For the rest of the pictures click here.
Posted by Kim at 7:49 AM No comments:

On July 27th Leo was dropped off for a half day play date. It was actually a super easy one as he had missed his morning nap and slept for 3 hours. Still, Leo and Molly managed to have some fun before and after nap time.

Joined at the hip

They got along great until Auntie Amy arrived to collect Leo and Molly had a little meltdown because she thought Leo was going to leave with the yellow ball he was holding on to. Other than that they were all smiles.

For the rest of the pics click here
Posted by Kim at 7:43 AM No comments:

When N leaves for the office in the morning he gives Molly a hug and a kiss, slings his bag over his arm, and tells Molly he is "going to work now." Well, the other day Molly decided to repeat this behavior in a very adorable manner.

First she gives N a hug and a kiss:

Then she slings her bag up over her arm:

Then she informs us that she's, "Going to work now":

For the rest of the pictures click here.
Posted by Kim at 7:36 AM No comments:

Grandpa Marsh's birthday was on July 23rd. Granny and Grandpa came over for some delicious BBQ (Filet Mignon and Ahi Tuna steaks). I also got a delicious birthday cake from Cosentino's. This was Molly's favorite part of the meal.

In a shocking turn of events, Granny and Grandpa were more interested in Molly than what was right in front of them.

"All right Grandpa... hook me up with a slice of THAT!"

For the rest of the pictures click here.
Posted by Kim at 7:27 AM No comments:

Fun at the park

N took some more great pics when we went to the park a few weekends back. Here are some of my favorites:

The rest of the pics can be found here.
Posted by Kim at 7:46 AM No comments:

Finally got these rated, tagged, and posted. Enjoy!
Posted by Nathan at 9:57 PM No comments:

When we were hiking up in Tahoe Molly started to imitate N whistling for Sadie. 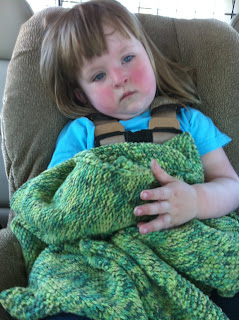 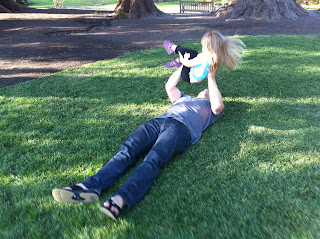 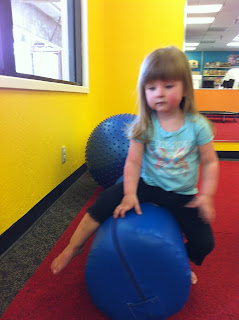 Once again everything has potential to be a horsie. Molly is tearing it up at Tahoe Tot Spot. Their new location is pretty nice.
Posted by Kim at 11:37 AM No comments: 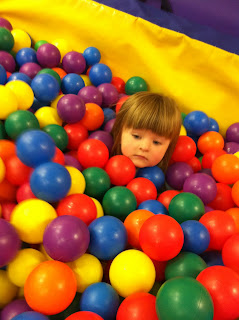 Bubbles in the Rose Garden 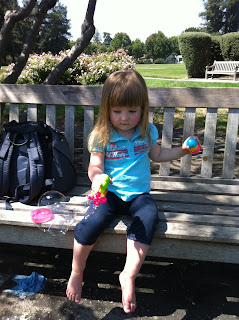