This evening Molly and I met up with Bree, Logan, and Callum at the Rose Garden Library to see The Bubble Lady. Bree hit some traffic so Molly and I walked down and met them there.

The Bubble Lady is POPULAR!

There was a line outside the library that wrapped around and a big guy was standing at the door handing out what I thought were tickets. Who knew The Bubble Lady warranted a bouncer and crowd control? Turns out the tickets were actually stickers for each of the kids and everyone was allowed in. Phew!

Molly and Logan got a little bored, but were pretty into the whole show for the most part. We went last night to see a magic show that didn't quite pan out. Molly got bored first and kept wanting to twirl around and do her Cinderella impression so N took off with her. Logan lasted a little longer, but we still ended up leaving early. However, The Bubble Lady was definitely more interesting as both kids kept popping up so they could see better.

Thanks again Bree for the suggestion!
Posted by Kim at 9:02 PM No comments: 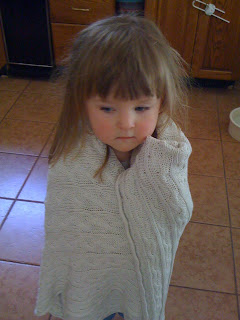 When Molly starts to wander around the house using her blanket as a cape (or does her best ghost impersonation) you know nap time is right around the corner.
Posted by Kim at 12:56 PM 2 comments: 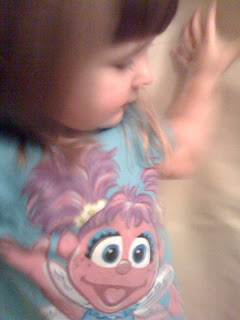 Playing in the shower curtain playing peekaboo.
Posted by Kim at 12:07 PM No comments:

I knew Molly had potential to be a future spa girl when she would flip over on her belly after bath time and pull her hair out of the way so she could be rubbed down with lotion. Lately it has become QUITE clear with her ever so subtle requests for back rubs and leg rubs. If you are sitting on the couch or futon you are a target. Molly will either flop down next to you put her legs over you or position herself so her back is right in front of you. She used to just wiggle back into you for the hint, but now she's getting bolder and will lift up her shirt and tap her back as if to snap her fingers and say, "Get on with it!" If you stop, she'll wiggle her shoulders in her silent plead for you to continue. If that doesn't work she will eventually say, "More mommy... please!" If that still doesn't work she will break out the hugs and kisses.

Last weekend Uncle Kyle came to visit. He arrived well after Molly went down Friday night and she was a little shy when she discovered him sleeping on the futon Saturday morning. However, she quickly warmed up and spent the better part of the weekend bossing Uncle Kyle around. She wanted nothing to do with mommy and daddy, but wanted Uncle Kyle to follow her this way and that way... to draw with her... to play games with her... to pretty much do whatever she told him to do. It was adorable. Thank god Uncle Kyle is a patient man. I was a slacker on the pictures, but here are a few:

N was able to capture Molly doing Cinderella's "Do you like it?" dress twirl tonight. Here it is:

Molly's latest obsession (at least dvd-wise) has been with the Disney Princesses. The first one she wanted to see over and over (and over) again was Belle in Beauty and the Beast. She LOVES the music in that one and will hum it for days after a viewing. Then she started to go old school and got caught up with Cinderella (1950), Sleeping Beauty (1959), and lately Snow White (1937). The girl loves the music.

However, I think she also likes the drama.

Over the past few weeks Molly has shown me what I thought was a glimpse into her teenage years. If I tell her it's nap time or bed time and she doesn't agree she will fling herself onto the nearest piece of furniture (or the floor) and fake sob. It's quite dramatic. I thought it was amusing, but didn't think much more about it until my mother pointed out that Snow White does the exact same thing and she's probably mimicking the movies. I'm not sure... is that better? Or worse?

Another ADORABLE thing she has picked up is to run up to you, twirl around, and then say, "Do you like it?" I believe this is from Cinderella when she shows off her mother's dress. It's adorable. We tried to get it on video, but you know how that goes... the minute the camera is out she has no interest in doing anything you request. Still, we'll keep trying.

ETA - Another Disney Princess influenced moment was when Molly first started quoting the movies. Well, in Beauty and the Beast there is a scene where Belle's father is being verbally attacked and she exclaims, "My father's not crazy, he's a genius." Let's just say Molly busted out with that gem at a few random moments and it was freakin' priceless!
Posted by Kim at 1:24 PM No comments:

Breakfast with the family 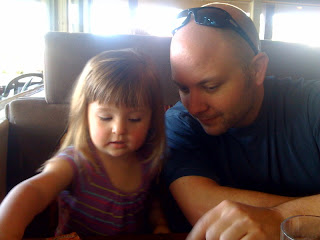 Molly and I went to Happy Hollow on Friday June 4th and met up with Robert and Connor and their B-Ma, Bev. Molly and I got there right when the park opened and she was able to ride the Mini Putt Putt ride all by herself. A few kids got in line during her solo ride, but she was still able to go right back on. It definitely pays to get there when the place opens.

We then met up with Robert, Connor, and Bev and let the kids run around the Redwood Lookout. They had a blast!

Connor was there too!

For the rest of the pics go here
Posted by Kim at 4:14 PM No comments:

Molly's last Little Gym class was last Tuesday. Unfortunately she had a slight fever Monday night and was still not quite herself Tuesday morning. I was bummed because she had missed Show Week the first time she took Little Gym when she came down with the stomach flu. The same stomach flu that kept us from going to the Dominican Republic. I knew they went all out so I called to let them know we weren't going to make it. Miss Michelle answered the phone as said we should come to the Thursday class so she could take part in the awards ceremony. I am so glad we did. Molly was SUPER proud of her shiny new medal.

Molly actually tried to hand her medal back to Miss Michelle at the end of class. She was stunned she was able to keep it. Here are some more of my favorites from the day:

This is totally normal...

Molly has discovered the joys of chalk... chalk outlines of herself that is. Another obsession. She demands we trace her all over the driveway. All we need now is some "Caution: Crime Scene" tape.

Molly's latest obsession has been these bracelets. Well, they aren't exactly bracelets. They're actually beer bands that say such lovely things as "control freak" and "sex addict". She mainly loves them for all the pretty colors.... it's not like she can read yet folks!

Molly is actually really good with her colors. She has even busted out with a few particulars that stunned me. One time I asked her what color something was. When she hesitated I asked if it was blue and she corrected me by saying, "No, periwinkle!" quite emphatically.

Another time N thought something was pink and I thought it was purple. Molly corrected us both by telling us it was fuchsia. Apparently reading her the colors of all her crayons has paid off. Either that or I missed a very special Sesame Street episode that covered this part of the rainbow.
Posted by Kim at 7:53 PM No comments:

Over Memorial Day Weekend we went over to the Jodoins for a lovely BBQ. The Chouns joined us and the kids had a blast chasing each other around the backyard. Sadie even played with Scout for an extended period of time. Somehow the ISO on my camera was cranked up to the highest setting so most of my pics are going to be a little blurry. Jenn was also able to snag some great shots and those can be found here.

It's been a while since I've updated the status on the Garage Project. We finally got the power switched over back in January and then started the plans and permit process. We got all that approved a little over a month ago and have been going back n' forth on quotes. Well, the contractor we ended up going with stopped by Tuesday night to answer some last minute questions. Once N was satisfied he asked when they could start and the reply was, "8:00 am tomorrow".

Garage was demoed on Wednesday.

I will be updating the gallery on smug mug so you can see the progress. Most recent pics start on the bottom of page 2.
Posted by Kim at 11:23 PM 2 comments:

This was taken 6/4/2010 at Happy Hollow on the Mini Putt Putt ride. It pays to be there right when the park opens as Molly had the very first ride all to herself. She was also able to ride again, but this time she switched over to the fire truck.
Posted by Kim at 11:02 PM No comments: 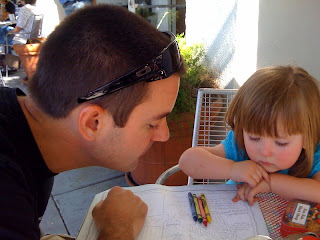 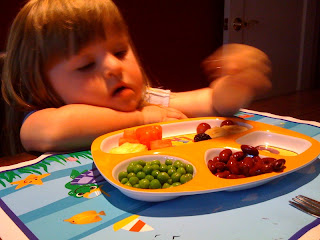 Shoveling in kidney beans.
Posted by Kim at 7:08 PM No comments:

Molly getting her medal at the Little Gym awards ceremony.

Video was taken at a Memorial Day BBQ at the Jodoins.

The Disneyland gallery is up and N got it down to 158 great shots. Definitely check them out when you have the time. Some truly priceless ones, but here are my favorites:

How freakin' cool is that?!?

Not quite ready to join the fun.

Phew! What a work out!

The boy loves his fire trucks!

Milk, it does a body good.

Full belly... nap time! (love the napkin as her blanket)
Posted by Kim at 7:54 AM No comments:

N got a new fish eye lens for the Disneyland trip. As you can see, it was his favorite.

On the drive down to SB.

This is what we do when Molly is sleeping.

The man behind the camera.

For the rest of the gallery click here (reverse chronological order).
Posted by Kim at 7:45 AM 1 comment: