B is for ballsy 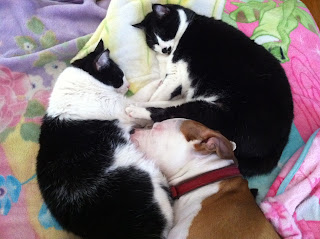 I think I missed posting about this gallery. The pics can be found here.
Posted by Kim at 7:08 PM No comments:

Pretty much every morning I can find Chai by our front door playing "catch" or "chase" with the reflection off her tags. She can do this for HOURS. 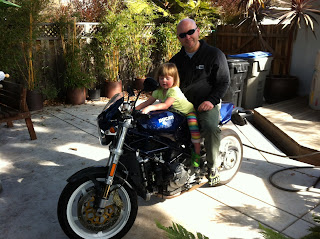 Last month (yes, I AM behind) we went to Airborne Gymnastics for Miss Amelia's first birthday party. Molly loved it so much we signed up for a trial class and she's now enrolled on Tuesday mornings. The place is MASSIVE, but Molly's absolute favorite spot is the trampoline pathway into the foam pit. She has been known to go rogue in class and find her way over there. During Amelia's party she was jumping off the trampoline and into the foam pit without bothering to slide down the wall/mat they had in place. It's a good 10 foot drop... my fearless child.

Swinging from the tower... just like Rapunzel in Tangled...

Maya showing everyone how it's done...

Working up an appetite...

For the rest of the pictures click here.
Posted by Kim at 4:53 PM 2 comments:

Aunt Tracey was heading up to the city after Christmas to house sit for some friends. She wanted to take Molly to the Exploratorium so we all headed up. I'm glad we went as they are moving locations next year.

First we walked around the Palace of the Fine Arts before heading inside.

Molly was making audio clips and playing them back distorted on her new (to her) iPhone (N's old 3G).

Everyone was in this position trying to get a good shot of the dome.

I think N called this "owling". I didn't ask.

Molly has the power of air.

Aunt Tracey shattering the poor girls' illusion that she has power over air by explaining the science behind it.

Magnets will not defy her.

I initially wanted Molly to sit in the big chair, but she insisted that daddy sit there so she could have the little one.

N thought this was awesome! Aunt Tracey was horrified.

For the rest of the pictures click here.
Posted by Kim at 4:31 PM No comments:

Someone found her stocking.

Daddy, this is taking too long.

For the rest of the pictures click here.
Posted by Kim at 4:26 PM No comments:

Aunt Tracey flew down on December 23rd for the holidays. Granny and Grandpa wanted to take everyone on a horse drawn carriage ride through downtown Los Gatos. We were the first ride of the evening so we were able to watch all of the horses come out at once. Molly was in awe.

Our carriage was referred to as the "limo".

The two horses that took care of us.

Afterwards we headed to the Los Gatos Brewing Company for dinner. Delicious as always!

I think Aunt Tracey is trying to steal my fries.

Just before Christmas we drove down to southern california for Uncle Gabe's Memorial. It took place at the Lake Shrine Temple in Pacific Palisades and they said it used to be a movie set. I believe them.

Once it became clear that the service was going to be standing room only I opted to give up our seats for some of Gabe's relatives and headed outside with Molly. A few other little ones joined us in our exploration of the grounds.

After the service we headed up to Annie's house (Gabe's aunt and adopted mother). Molly immediately made herself at home and had a blast bossing all the adults around as she was the only little one there. She also made fast friends with a little doggie named Mouse.

At first I was hesitant to bring Molly along because I was concerned about her making it through the service. Then I thought people that haven't seen N in years would want to meet her. I am really glad she came along because several people came up to me before we left and told me she was a welcome distraction and it was good to laugh after a week of non-stop crying.

For the rest of the pics click here.
Posted by Kim at 3:55 PM No comments: