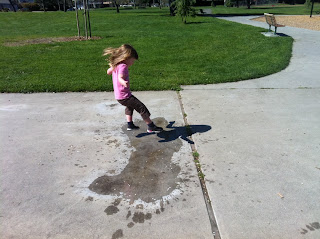 The rains have finally subsided and the sun has come out. As a result we have put up Molly's swing. I woke up Monday morning feeling like death warmed (slightly) over. Aches, chills, cough... the whole nine yards. Hell, even my HAIR hurt. Luckily N was working from home and was able to run some interference for me. I managed to take Molly down to the Rose Garden in the afternoon to burn off some energy, but was zapped once we got home. N took Molly out back and put her in her swing... where she proceeded to chill for the next TWO hours. She did the same thing for him last night. Saying she loves her swing is appearing to be a bit of an understatement.

The video is not terribly exciting (and yes, we ARE looking at landscapers), but you get the idea that Molly is totally content swaying back n' forth.

Molly is taking swim lessons at AVAC and LOVES being in the water. However, the one hurdle she needs to get over is the "big breath, eyes in." Once she starts putting her face down in the water she can really start to practice on her actual swimming. Molly is definitely comfortable in the water as she has no problem floating on her back (she calls it "Relax!"), turning from her back over to her stomach, and even dunking herself completely underwater to retrieve a toy from the bottom of the pool (after making sure she can't reach it with her hands or pick it up with her feet). The one thing she doesn't seem to care for is putting her face in the water. She will do a quick tap, but is so busy bouncing and twirling around she has to constantly be asked to do so and then only does it enough to get her her nose and the teeny tiniest bit of her forehead wet. I'm pretty sure she would spend the entire class playing on the stairs or simply twirling and bouncing and be more than satisfied. Since the goal is to learn how to swim we've been trying to encourage the "Big breath, eyes in" in the bath and even in the hot tub.

I got this text from N when I was at Muay Thai last week and they were in the hot tub.

Molly has also looked N right in the eye and said, "I did it, you missed it" when in fact she had done nothing of the sort. She has pointed to her hand, called her hand Molly, and then put her hand in the water saying it was doing big breath, eyes in.

A few weeks back Molly insisted that Woody and Tink tag along with Daddy to work. Does this mean he gets to use the carpool lane? 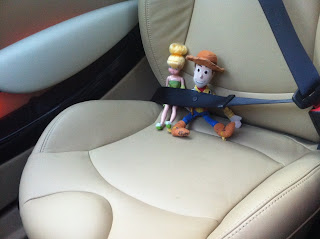 Then from work Daddy sent Molly this pic: 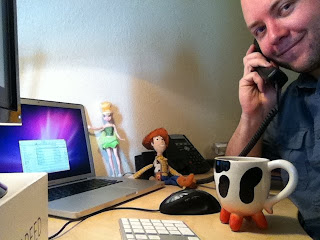 Dear Molly, thanks for sending Tink and her pal Woody to work with me today. Their unique perspective has led to additional efficiencies in the systems and processes at work. I really appreciate the extra help, it's been busy lately. I'll get them back to you safely.

When Molly saw that she said, "Woody and Tink are helping daddy on the computer!"

Then a light bulb turned on.

The first adventure was a break in the rain and some jumps into the puddle at the end of our driveway. Just the froggy boots, but once she got a taste of the fun she wanted more more MORE.

The next day Molly put on the whole froggy outfit and had a blast going back to the car after swim class.

Yesterday N and I took her down to the Rose Garden in her froggy gear and she had a blast in some mud puddles. Her boots were at least halfway full of muddy water by the time we got home and her pants and socks were soaking wet. Molly went immediately into the tub. N took pics on his camera and will hopefully get those up soon. For the rest of the ones taken on my iPhone you can click here.
Posted by Kim at 2:28 PM No comments:

Most Sundays we head up to Grandma Lucille and Papa J's for dinner. Here are some pics that N took one Sunday.

Molly has definitely perfected the art of LOOKING innocent:

For the rest of the pics click here.
Posted by Kim at 2:16 PM No comments:

Rose Garden with the Sneeds

N is still plugging away and going through all the pics he's taken over the last few months. Here are some from a walk down to the Rose Garden with the Sneeds back in February.

Off in her own little world...

For the rest of the pictures click here.
Posted by Kim at 2:05 PM No comments:

N spent some time this weekend going through the 600 or so pictures he has taken in the last few months. Here are some from a park play date we had with friends the first weekend in FEBRUARY!

We started the day out at Stacks. I would love to know what N was doing to get these reactions out of Connor and Molly:

Molly, the Captain of this trusty ship:

Then I had to come along and ruin things. I was the one that dumped out the sand from the pink container Logan is so upset about. Unfortunately he thought Molly did it... hence the death rays shooting from his eyes:

Connor has some great expressions... "You talkin' to me?!?"

This one of Jon and Callum cracks me up. Baby? What baby?

For the rest of the pictures click here.
Posted by Kim at 3:59 PM No comments: 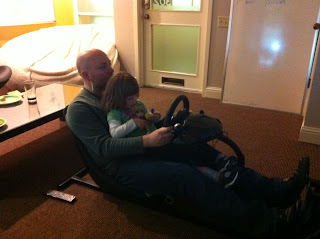 Quite a different set up than at home.
Posted by Kim at 6:42 PM No comments: 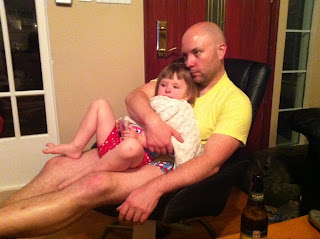 They've had a full night while mommy was at Muay Thai. Chillin' and watching How To Train Your Dragon before bed time. Toothless reminds me of Snickers.
Posted by Kim at 8:26 PM No comments:

Molly and Daddy running around Hathaway Park earlier today.
Posted by Kim at 9:35 PM No comments: 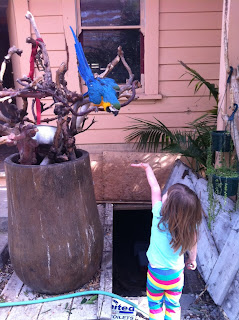 Molly saying hello to the (very loud) birdies.
Posted by Kim at 2:14 PM No comments: 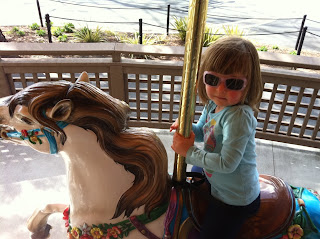 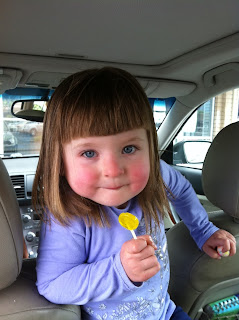 Molly's hair grows so darn fast I had them take a couple inches off. Hopefully this means we can go more than two months (not counting the in between bang trims) before her next cut.
Posted by Kim at 11:26 AM 2 comments: 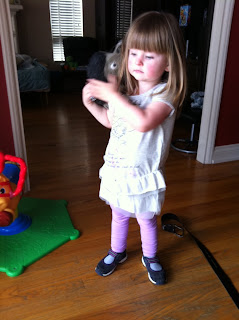 I think this is the closest Molly has been to a dress in a long time. It's more of a long top. Let's see if the extra fabric pisses her off.
Posted by Kim at 11:04 AM 3 comments:

On Friday February 25th the Jodoins, Chouns, and Connally/Shipmans headed up for the weekend. They had rented a cabin in Truckee (North Shore) to celebrate Jenn's b.day. Unfortunately they had a helluva time getting up here. A storm had rolled in Thursday evening and proceeded to dump about 2 feet of new snow down at lake level. This was not all that big of a deal considering it had dumped 4 feet overnight the week before. However, the 45 mph winds wrecked havoc and caused highway 80 to close down due to white out conditions and an avalanche. You know, the little things that make life interesting.

Our plan was to head up first thing Saturday morning to join them. By then the storm had passed and it was turning out to be an absolutely gorgeous day.

Once we arrived N and Bree took off for a half day of boarding at Northstar to meet up with Jenn, Julie, and Jamie. I stayed behind at the cabin with Molly and the rest of the guys. It was a little chilly out (high in the low 20's) so we mainly hung out inside and let the kids play.

I love how all the Jodoin men have some sort of tech in their hands.

We were originally going to hang out with everyone during the day and spend the night with our friend Nicole (who also lives in Truckee). However, I realized this would mean we wouldn't really get to see the adults as we would be taking off for Molly's bed time. So we brought an air mattress and crashed the party (hey, I made dinner!). We put Molly down in one of the bedrooms and then moved her out to the main room downstairs where we were crashing when all the adults went to bed. Since we were pretty central to everyone there were a couple interruptions during the night.

Sunday was another gorgeous day and this time the temps warmed up to the low 30's. The guys headed off to the slopes while the ladies (and N) hung back at the cabin. When all the kids were getting bundled up to head outside so they could play in the snow I asked Molly if she'd like to join them. She looked me straight in the eye and said, "Mommy, it's cold outside" and then went back to her snack and movie on the iPad. Meh. Maybe next year.

In the afternoon N and Julie piled all the kids into the hot tub and they had a blast. Their favorite part was N throwing a huge snowball up to the bottom of the deck so it would rain back down on them. I think someone got video of that. The kids loved it.

Since we did not spend Saturday night with Nicole I made plans to meet up with her for dinner on our way back down to South Shore. We were going to get up and go first thing Monday morning, but N deemed it possible to work remote another day. We still met up with Nicole and had a delicious sushi dinner at Drunken Monkey, but then headed back to the cabin for some more adult time. At this point everyone was dragging ass and I think we were all in bed by 11.

Monday morning we took off for South Shore while everyone else headed off to a snow park. N had some work to get done and the plan was to take off that night around 7. However, Molly went down for a marathon 5 hour nap and didn't wake up until 7. We got a little bit of a late start, but still got on the road. The upside to leaving late on a Monday night was NO traffic. I think I can count on my fingers the number of cars we even saw between the cabin and our first stop in Placerville. The only downside was pulling up to our house just before 1 in the morning. Needless to say I was definitely dragging some ass the next day as I did all the driving.

For the rest of the pics click here and here.
Posted by Kim at 8:11 PM No comments: