I have only been to one cookie exchange before (thanks Corey!), but it was definitely something I wanted to host. Last year the holidaze were upon us before I thought to plan one and then everyone's schedule was too crazy busy to fit one in. This year I wanted to get it on everyone's calendar before Thanksgiving when everyone's schedules go nuts through the end of the year. We planned it for the Sunday before Thanksgiving and I had 7 people RSVP with a commitment to baking cookies. All 7 showed up so there were PLENTY of cookies to pass around. Everyone brought a half a dozen per person with another half dozen to share/sample. So that also meant you were taking HOME that many cookies. Everyone that committed to making cookies showed up and arrived with quite the assortment.

I had every intention of baking early. Then we had a power outage Friday night that zapped all motivation once the lights finally came back on. A work party at Molly's school on Saturday plus forgetting to put out the butter pushed my baking until Sunday morning. Yes, THE day of the actual cookie exchange. I had wanted to bake a new recipe, but I lost confidence once I realized each batch would only make a dozen cookies (actually around 15). So I made two batches of the Lemon Butter Cookies and then switched over to my old standby of Reese's Chewy Chocolate Cookies which yield almost 5 dozen cookies. So, people took home a few of the Lemon Butter cookies and 8-10 of the Reese's. (Note - The Lemon Butter Cookies turned out great and I will definitely be making them again soon).

All in all it was resounding success! This is definitely something I plan to make a tradition out of.
Posted by Kim at 5:54 PM 1 comment: 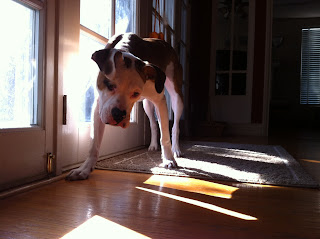 Chai is "hunting" the reflection from her own tags. I wonder how long she'll keep this up.
Posted by Kim at 10:52 AM No comments:

F is for Fall 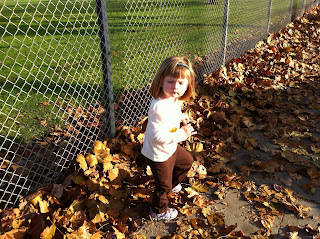 Mother, why must you interrupt my leaf stomping for a picture?
Posted by Kim at 10:39 PM No comments: 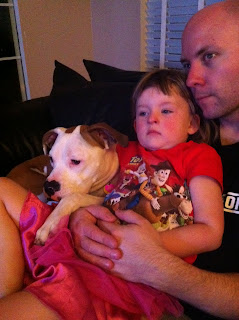 C is for cuddles 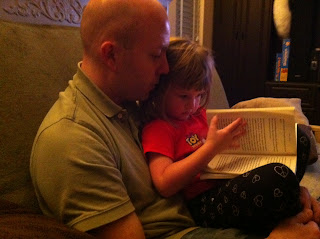 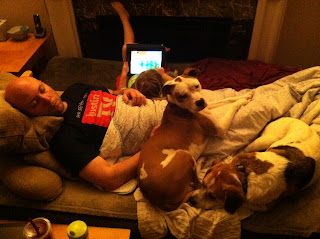 This is N's idea of watching Molly.
Posted by Kim at 6:58 PM No comments: 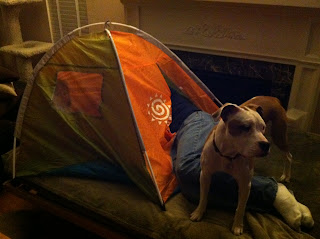 This is what greeted me when I got home from Muay Thai tonight.
Posted by Kim at 8:18 PM No comments:

Hey, YOU with the camera! 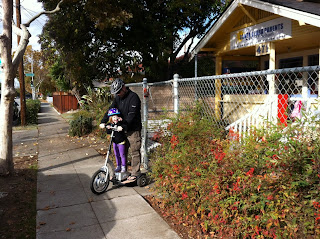 Molly is scolding me for taking their picture. Yesterday we stopped by her school as we had a weekend maintenance job card to take care of. I drove the Yukon just in case one way on the scooter was enough. Molly and daddy made it both ways without any issues. It was a nice long scootin' adventure.
Posted by Kim at 10:47 PM No comments: 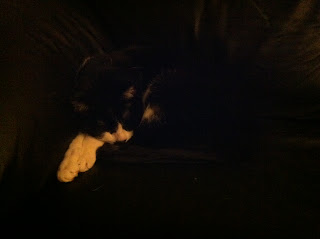 Blending in to the black couch. Sometimes she'll curl up and you completely miss her.
Posted by Kim at 10:43 PM No comments: 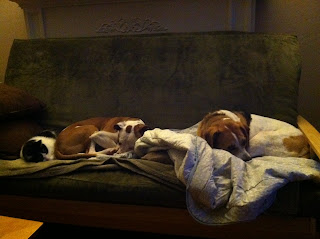 Michael and Chai stole my spot!
Posted by Kim at 10:42 PM No comments:

It's hard to be the Chai. 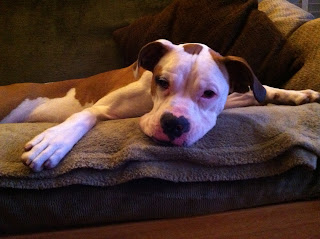 While our backyard lighting is gorgeous in person, it does not offer ample lighting for a night time video. Still, you get the idea.
Posted by Kim at 5:56 PM No comments: 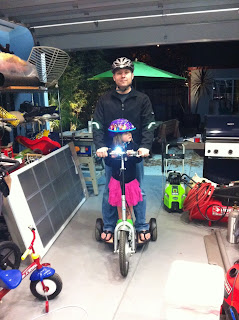 Molly has been waiting patiently these last few days to go on the scooter with daddy. Mommy nixed a ride to Starbucks on Sunday as Molly did not have a helmet. A Tinkerbell one was acquired and Molly has been itching to go ever since. They both had a blast doing a quick run down to the Rose Garden since it's dark. I forsee a long scootin' adventure this weekend.
Posted by Kim at 5:41 PM No comments:

Quotes of the day

Yesterday Molly and Daddy hung out while Mommy was over at Granny Marsh's. I got a few priceless texts with Molly quotes.

First one was shouted during a tickle match with daddy:

"Ow! Ow! You're hurting my feelings! Stop! Ow!"
(all said while laughing uncontrollably)

The next one was more of a conversation:

Daddy: Molly, have I told you today how much I love you?
Molly: No.
Daddy: Molly, I love you to pieces.
Molly: NO!!! GRANNY loves me to PIECES!!!
Daddy: Okay dear, how does daddy love you??
Molly: Daddy... You love me with a KISS... Come here.

The last time we went to Tahoe... all the way back in AUGUST... we discovered the Tallac Historic Site. Molly and I went back and spent the afternoon exploring. They have restored the main house and the surrounding guest cottages back to its heyday of the 1920's.

All of the furniture and accessories are period specific. The best way to describe it would be a life size dollhouse. Most of the little cabins on the grounds had a sign out front letting you know who would be staying inside. I had my iPhone with me and there were gates across all of the doors which made taking pictures a little tricky, but hopefully you'll get the idea. This is the Butler's quarters:

However, once the water was spotted Molly insisted on swimming first, exploring later.

All done swimming and time to warm up in the sun.

Peeking in the windows of the main house.

Molly loved this little carved out stool from a tree trunk.

Looking into the creamery.

Looking in the kitchen (main house). They have a barking noise that goes off when you get close to deter the bears. Molly LOVED that!

And every now and then there was a creepy mannequin.

For the rest of the pictures click here.
Posted by Kim at 12:51 PM No comments:

I love this one because Molly and Connor are beaming at each other:

Molly was Cinderella for Halloween this year. We went to the Disney Store and got the official dress. She had initially said she wanted to be Tangled (after discovering the Jack Skellington costume was for adults only) and then when they didn't have ANY Tangled dresses in the store she picked out Sleeping Beauty and Cinderella to try on. Sleeping Beauty was nixed once Molly realized there were long sleeves. She fell in love with the Cinderella dress. Molly actually got this same dress last year for her birthday and refused to even try it on because it was too itchy. We had a long conversation about this very fact in the dressing room at the Disney Store and Molly insisted it was fine. I should have known better.

The first attempt to wear the dress was during a trick or treat event at the Pruneyard. The kids get dressed up and go around to all the businesses for candy. N took Molly and met with with Jennifer, Robert, and Connor. Molly got about 10 feet across the parking lot before she insisted the dress come off. To be fair it was 90 degrees out and the dress is polyester and LONG. She ended up trick or treating in shorts, cowboy boots, and a Batman t-shirt. Eh, she got candy.

On Halloween Grandma Lucille and Papa J came down. Auntie Carina, Uncle Chris, and cousin Temperence also came over to go trick or treating. There had been a Halloween party at Molly's school that day. Another little girl was also Cinderella and N got some pictures of the two of them sitting together. However, it was another warm day and Molly was back in her normal clothes within 10 minutes. I was hoping it would cool off enough that night so she could at least go trick or treating. We got her in her dress and took some pics with Temperence who was dressed up as Tangled. Then we headed out. Since it was so hot Molly insisted on wearing her flip flops. The problem was her dress was long enough that she kept stepping on the hem. Not an issue in taller shoes, but a constant issue in her flip flops. Molly solved this by gathering up her dress and hiking it up above her waist. Yup, everyone could see her underwear. At first I thought she was wearing Cinderella underwear, but upon closer inspection it was The Little Mermaid. Eh, it was still blue.

We went to a couple houses and made it to the street behind us when Molly started to pull at the neck of her dress. Lucille ran back home to get a t-shirt. Unfortunately once the dress came off to put the t-shirt on Molly had no interest in putting the dress back on. So we went home. However, all was not lost as Molly had a BLAST handing out candy to the other kids. She LOVED this.

We got her little chair from out back and sat out on the front porch so Molly wouldn't accidentally let any of the furry kids outside in her excitement. Molly would inch down the steps and peer down the sidewalk in hopes of seeing some trick or treaters coming up the street.

Molly still talks about handing candy out. She keeps telling me soon she will turn 5, then it will be Halloween again (she's also said when it gets warm again it will be Halloween, ha!), and she can hand out candy to all the trick or treaters. I wonder if we'll even get her out again next year or if she'll insist on handing out candy all night long.

A few days after Halloween Molly and I went back to the Disney Store so she could spend some of her birthday money. Molly ended up picking out a Tinkerbell nightgown. However, she insists that it's a dress not a nightgown. I thought we were going to run into another situation where she'd get the dress and never wear it, but that wasn't the case. She wears this ALL THE TIME when we're home. She loves it. If only I had known this BEFORE Halloween we might have actually made it trick or treating.

Next year I'm getting her underoos.
Posted by Kim at 12:06 PM No comments:

A few weekends back we watched Odin and Grover. When they first arrived Chai was trying to get Odin to play with her by pawing his face. Odin was not happy about this turn of events. The hysterical part was Grover doing 360's in the air right next to Chai in a desperate attempt to get HER to play with HIM! Chai finally realized she did indeed have a willing play mate and for the next several days they were a whirling dervish of motion. The interesting part was that Odin came around and started to INSTIGATE play time with Chai. Where was Sadie in all this? Sitting inside, disgusted by the animals out back.

For the rest of the pictures click here.
Posted by Kim at 11:56 AM 2 comments: