N got back last night from Austin, TX. He swears he was on a business trip, but all I kept hearing about were all the bars and strip clubs he was going to so I'm pretty suspect about the whole "work" aspect. He left early last Saturday morning and got in late last night. Not a whole lot is different when he's gone during the week except for me not being able to make it to Muay Thai, but it is a bit of a bummer when he's gone on the weekends as we don't get to hang out as a whole family. Molly had spent Friday night with Granny and Grandpa Marsh so we could go out for Jenn's b.day dinner. Since N had an early flight and this was (technically) a business trip I told him to cab his ass to the airport and not wake me (aren't I a love?). I vaguely recall a quick kiss goodbye and I continued to sleep in. :-)

I am very glad I did as Molly woke my ass up just after 6:00 am the next morning. Little stinker. We met up with friends that morning at Stacks for a yummy breakfast. Molly loved her Mickey Mouse shaped pancakes and bananas. Afterwards we headed over to Jenn and Jarrod's place for a play date. The goal was to tucker the kids out before nap time and it worked like a charm. Molly had resisted nap time for me on Saturday, but she crashed out in the car on the ride home on Sunday and slept through the transition to bed. That night we headed up to Lucille's for dinner.

On Monday I had made arrangements with Bree for a play date when she got home from work. Jon was at the same conference as N so she was also solo parent this week. I told Molly we were going to see Logan and she immediately asked for Robert and Connor as she had seen all of the boys the day before. She likes her friends to travel in packs. Logan ran over to greet her as soon as she got out of the car and was super excited to show her all of his toys. At one point I look over and Logan has Molly by the hand and is leading her to the front door. Perhaps he wanted to take her on a romantic walk around the neighborhood? It was super adorable and Bree tells me to grab her camera that's sitting on the dining room table. 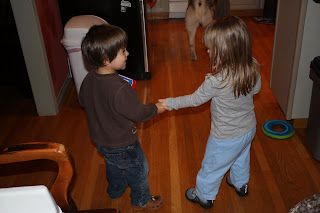 After dinner the kids starting asking for something to be put on the tv so Bree turned on an episode of Sesame Street. Logan was the perfect little gentleman and sat down next to his Batman chair so Molly could have that seat. 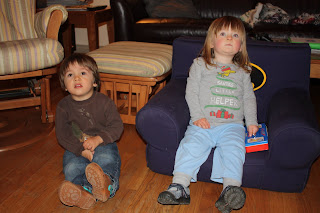 On Tuesday Molly bug woke up from her nap and was just not herself. When we were in the checkout line at Target that morning I spied two corners of her bottom left second molar poking through and knew that was the culprit. When she started crying while pointing at her mouth and saying, 'It hurts" I immediately got out the Children's Motrin and got a good dose in her. She calmed down once that kicked in, but pretty much just wanted to cuddle the rest of the evening. I haven't been able to see any of the other molars breaking through, but it's also hard to get a good look. I'll have to try again now that N's home and can help.

Yesterday N called when he was jogging through the Phoenix airport trying to make his connecting flight. I put our cordless on speaker phone so Molly could say hello. Well, she opened her arms and said. "Come on, come on" while motioning me to give her the phone. I warned N we might be disconnected and when Molly took the phone she HUGGED it. Then she held it out and kissed the screen. She does this when we Skype with N on my laptop (the kissing the screen part, she has yet to try and HUG the laptop). Then she started to rock the phone like it was a baby and even put it up to her shoulder and tried to "burp" it. It was hilarious and adorable all at the same time.

Molly is definitely happy to have daddy home and immediately demanded "up-up down" (her way of requesting N to carry her upside down around the house) and "daddy head" (to be put on N's shoulders). She really loves to boss him around.