Since we were dealing with Cone head Chai, the Jodoins came over to our place for dinner and games. We decided to temp fate and put everyone to bed in Molly's room.  N and I put the futon mattress on the floor for the boys to sleep in. 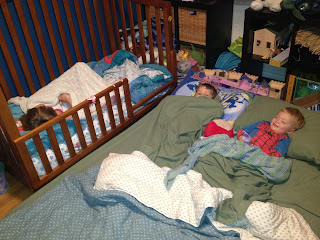 Now, N set me up with a night vision web cam that has an app so I can see Molly from my iPhone.  He did this so I can workout in the man cave on my heavy bag when he's out of town.  The adults were at the dining room table keeping an eye on everyone via the app.  The best part was when Connor stood up and Jarrod yelled at him to get back in bed and he DOVE under the covers.  It was hard to not laugh too loud.  They actually all fell asleep fairly quickly considering.

We played Settlers and Jenn won.... with a total dick move at the end.  She was going to win, but before winning she decided to steal everyone's wheat for the fuck of it (didn't give her any extra points) and THEN won.  I'm so proud. Then we did a few games of Rummikub and called it a night. 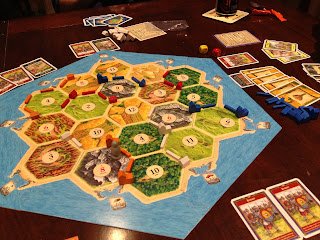