Molly and I picked up some party harts, tiaras, poppers, and glow-in-the-dark necklaces from Party City.  While there she insisted we get a piñata… "because it's not a party without a piñata mom!"  So we got one… an Ariel one… I'm still a little fuzzy on what Ariel has to do with celebrating the New Year, but Molly was adamant that was the correct one to purchase.

Molly and N filled the piñata with goodies and we hung it out back (took some pics on N's camera).  Once the Chouns and Connally/Shipmans arrived we headed out back for destruction.  It actually held up pretty good… but the kids prevailed and goodies were had by all.

Then we headed back inside and continued to gorge on this spread: 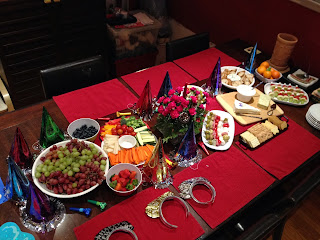 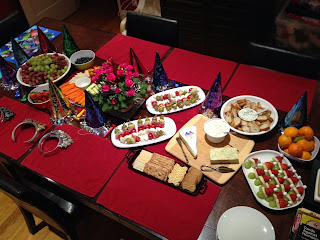 I kept offering to set up the panini bar, but no one was interested for some strange reason.  We celebrated the New Year around 8:30 pm with the kids by going outside and allowing them to pop all the poppers and make as much noise as possible.  When we went back inside they watched the ball drop in NYC and then we got the kids in bed.

The adults stayed up to play Cards Against Humanity which was hilarious.  We watched the ball drop again in SF and then everyone headed home.   As the kids were getting loaded up in cars a procession of people with pots and pans and other loud things went hootin' and hollerin' by… perfect timing.

Happy New Years everyone!  May 2014 be the best year yet!