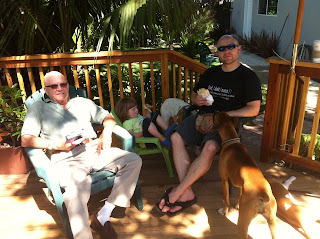 Grant Howard Hickson passed away at 2:10 am (Pacific Time) this morning. He was 77 years old.

In April of this year Grant was diagnosed with stage 4 kidney cancer that had spread to his bones and bone marrow. He started a drug therapy treatment at the Mark Twain Medical Center in San Andreas, CA. A little over a week ago he came down with pneumonia and opted to stop all treatments. Grant was moved into hospice care at the Mark Twain Convalescent Hospital where he had been staying. Earlier this week he became non-responsive and passed away earlier this morning.

Nathan had been carrying his phone with him everywhere for the past two days and was still up when the call came in earlier this morning.  He woke me up as soon as he got off the phone and after talking for a bit he crawled into bed and passed out.  I am simply relieved we were back from MN when the call came in.

We got a bit of a late start since I didn't want to wake N as he clearly needed the sleep.  Our friend Jon came over to pick up the dogs and I made arrangements to drop off Molly at Lucille's.  Once we got to Lucille's N called his half brother Terry and ended up walking to the park behind Lucille's house.   He came across a grey kitten that was clearly too young to be out on his own.  Of course he did.

I get a phone call asking me to come over with a towel and a box and we wrap up the little guy. 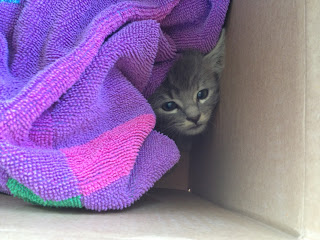 The local animal shelter was closed since it's Sunday.  I suggest finding the next open one on our way as we still need to drive up to Grant's place and the hospital.  N finds the address and we hop in the car.  Once we get there N walks up and gives a little too much information.  He mentions this happened at his mom's place in Fremont and we are now the next county over.  The officer sends us back to the shelter in Fremont that was closed instructing us to put the kitten in the night drop off cages outside along with a note with all the pertinent information.

I have N check to see if there are any more shelters between us and the one in Fremont and he comes across a Humane Society.  We drive to that and they direct us back to the county shelter we just came from.  We start driving back to Fremont when Bree caves and tells us they will foster him.  By the time we get back on the road it's 3 hours after the time we initially left the house so we decide to head to Grant's house to inform his neighbors before it gets too late.

N appreciated the kitten distraction, but it made for a lot of extra driving on a day full of driving.  Hey, at least we found the little guy a good home.  We made it to Grant's place and went to inform both neighbors about Grant's passing.  Then we headed to the hospital to pick up Grant's things.  It was a long rough day.