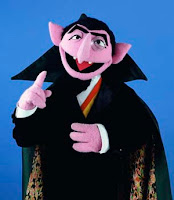 Molly has turned into The Count lately. She has always been good with her numbers and can easily count (correctly) well into the 50's. However, now she is starting to count objects. If there are three items she will count them off and then name them Flora, Fauna, and Merryweather (the fairies from Sleeping Beauty, duh!). If there are four she still usually does the fairies and then adds in Sleeping Beauty herself. Any more than 4 and it's any number of Disney movie/characters that she'll rattle off once she's done counting. I'm not sure why she always follows up counting with character names, but it's super cute.

One day I caught her adding. I'm not sure if it was on purpose, but it was pretty cool. Molly was counting out toys and had 4 in front of her. However, there were two on one side of her and two on the other. Molly then said, "One, two... Two and two... Four." It's probably coincidence, but I'll take it!
Posted by Kim at 10:02 PM