We rescued Sadie back in February 2003.  When we first brought her home the vet thought she was a Beagle/Jack Russell mix as she was only 15 lbs.  We guesstimated her birthday to be roughly mid-November 2002.  However, when she grew to be 60 lbs we figured she might have been a little younger when we got her.  Chai was roughly 6 months old when we brought her home back in June 2011 which would put her birthday at early December 2010. 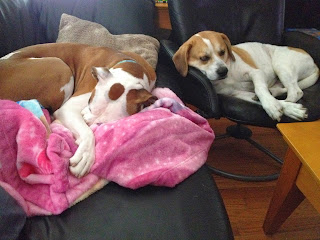