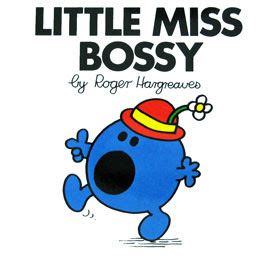 These days Molly has an opinion on everything. From what to wear to where to sit... well, where mommy and daddy should sit. N and I don't mind being bossed around because Molly usually turns it into a game. She turns EVERYTHING into a game. It really is quite endearing. However, yesterday she tried to boss around two older kids at the park. The 4 year old boy did what she said, but the 3 year old girl did her own thing. I thought that was pretty funny.

Molly isn't rude about her bossy behavior, but rather just wants you to know she has an opinion on the matter... a strong opinion. My mom was putting her down at our house Halloween night and Molly was very happy and chatty. Then it came time to put her pajamas on and she looked my mom straight in the eye and said, "No monkeys." She was very calm while stating this fact, but there was no question about whether or not she would put on the pjs. So the monkey pjs went back in the drawer and Molly wore another pair. Then she wore those same monkey pajamas a few nights later. She is wanting to be involved more and more when I get her dressed in the mornings. I am giving her two choices for pants and two for tops, an either/or situation. I think if left to her own devices she would just run around naked. Not a problem in the summer, but it is chilly these days (chilly for CA that is) and she needs to wear something.

Molly is still LOVING her swim classes. Well, everything except the dreaded monkey walk. The one thing all the other kids that hate water don't seem to mind she find torturous. It's hilarious because she will make a fuss the entire way. Then she will stand on the ledge at the end, with her hands in fists at her side, and scream at me for a good 5 seconds to let me know she is *not* happy. Then she's all smiles and jumping back into the water again. She's getting really great at diving in (from a sitting position on the wall) and turning herself around and grabbing the wall again. I pretty much just stand there and watch her. Every 3 or 4 times I might help lead her hands to the wall, but for the most part it's all her. Plus she insists on pulling herself out of the pool each and every time so she's really tired by the end of class. (Yes!)

N went to class with her this week and they have this underwater bench thing with hand rails. They were having the kids put their faces in the water to grab rings. It really was just an exercise to get kids used to putting their faces in the water. Well, Molly thought that was completely ridiculous and used her foot to pick up the ring. She held on to one of the hand rails for balance while she brought her foot up out of the water so she could grab the ring with her free hand. It's not that she has a problem with putting her face in the water, it's more that she thought that was just a dumb way to pick up the rings.

I think my favorite thing right now is story time. This doesn't just happen at night before bed, but really any time Molly wants to snuggle down and read. Some times she will hold the book next to me and turn the pages herself. Other times she crawls into my lap and leans back and has me hold the book in a hug around her. Sometimes we read the story, but other times Molly will sit there and point out everything on the page. "And" is turning into a game that we can play anywhere. Molly will point at something and say it's name and then will say "and" in a very drawn out manner until she spies the next thing. It's definitely her version of "I Spy" and it's adorable. I am constantly amazed at how patient and observant she is. She takes in *everything*.

Another talent she's developed is singing along to songs. Lately she's been obsessed with "Honey, Honey" from the Mamma Mia! soundtrack. The first song I caught her singing along to with accuracy was in Kauai. Bob Marley came on and then I heard a little "No woman, no cry" from the backseat. I think I might need to edit some of my playlists before she starts understanding the lyrics. Now it's definitely more mellow songs that she can repeat, but it's only a matter of time before she repeats some of the faster songs.
Posted by Kim at 8:05 AM

My friend Robin's daughter is all about the "BAH BAH BAH" part from Sweet Caroline (from Glee, naturally) aahh hilarious.

Man, I'm missing all the fun time to corrupt your child into oddity and hilarious shenanigans